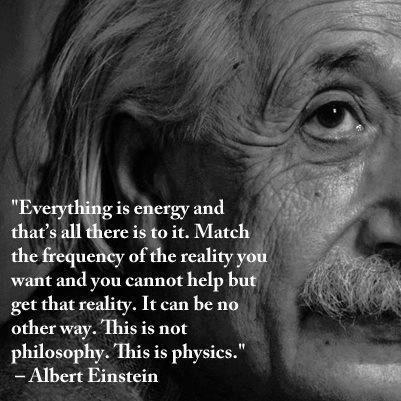 Words and actions in the physical world, all have an energetic component attached to it, due to the effects that it can have on the physical world itself or another person; which are all made of matter. All matter is composed of molecules, which are made up of atoms. These atoms are made up of protons, neutrons, and electrons, which are extremely tiny pieces of energy that give atoms either a negative, neutral, or positive charge. Any change that we cause in matter through our words and actions, such as consciously affecting a person’s emotional state, or physically altering a physical object, is just as energetic as it is physical. Since we’re beings composed of this matter, everything that comes from us is matter based; including every action you take, as well as the sound and meaning of your words. After taking this into account, you guessed it… this makes everything energy (Einstein got this conclusion too). Through the manipulation of these particles by the willpower of a “connected” person’s consciousness, you can help manifest reality for yourself and even affect others’ reality. Ideas themselves are energy too, but you must have a universal connection in order to use the law of attraction to its fullest. This contributes to your karma as discussed in parts 9 and 10. But to get yourself able to connect to this energy, you might also need to overcome certain un-productive patterns of action, that are usually caused by feelings like doubt, apathy, sadness, or fear. 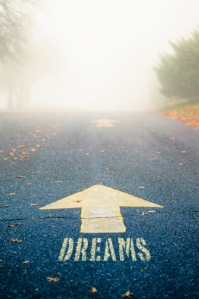 When experiencing doubt, apathy, or sadness, immerse yourself into something that has to do with your dreams or long-term goals. Take action. This ensures that you will continuously move forward, and you won’t stay confused, un-motivated, or unhappy for very long. These feelings are mainly a response your subconscious mind gives you when you’re not being productive, and when you’re not taking action towards a goal when you know you should. Keeping this necessary focus on the path to your goals and dreams can open you up to an entire new array of people, circumstances, and even feelings that will contribute to your emotional, career, and mental growth. This takes time to do, but putting forth the effort to really sit down, concentrate, practice your craft, and then apply it all to the realization of these goals is the path needed for everyone to find their way to happiness and success. As we discussed before in the previous parts of the series, success is attained when you’re happy and satisfied with your life, and when you’ve put forth your best effort to attain the objectives that will give you this happiness. Although, in order to put forth your best effort and really try to succeed at something, you’ll need to truly “want” to be good at it. This inner desire to put forth your very best effort is fueled by you being emotionally connected with a goal or action.

If the thought of not attaining these goals or visions strongly bothers you, then you know that you’re emotionally connected with them. The same can be said if the thought of success with these dreams, fills you with happiness. You can become emotionally connected to a goal or dream by finding out what topic, action, or cause that stirs the strongest positive feelings (or the most desire for achieving it) up inside of you. These “positive” feelings could also be a desire to change something “negative” that’s going on in the world, or you could even connect with a desire to change your own negative feelings or circumstances (ex., In the case of Malcolm X’s connection with his vision for African-Americans to have equal rights); so it’s important to keep an open mind. However, you can positively emotionally connect to a goal or vision that society at large deems negative or evil.

Hitler is big example of this. Although we all know how evil it is to kill large numbers of people, he emotionally connected to his desire to kill the jewish people, and evidently, his destiny was in fact to cause genocide and lead a nation to try to take over the world. Even though he had other reasons, such as his powerful desire to show the superiority of the nordic race to all humanity for the killing of Jews, his connection to his goal was so powerful, that he was able to rise up and become a charismatic leader of “evil”. The rest of the world viewed his actions as evil, which it is, but HE genuinely felt good about trying to show Aryan superiority to the world through leading a murderous group of german people; to try to conquer the world. Good or bad, you usually won’t know your destiny until you take the first step.

Parts of The Series:

But why wouldn’t everyone get the charisma they need to achieve their “exact” dreams? How are we supposed to know who will get exactly what they want, and who will end up being happy with something different? Is it possible for our dreams to change? What exactly is charisma, and how can we you develop more of it? Are your desires connected to your destiny?

Welcome to the blog

abraham hicks author blog author brian a. brown author brian brown authorbrianbrown bbrown1 bbrown1.com being yourself brian a. brown Brian Brown Brian C Brown children's books depression detroit energy fear finding happiness finding yourself focus gaming happiness hard work health how to become inspired how to become successful how to be successful how to find happiness how to find yourself how to fulfill your desires how to manifest how to use the law of attraction how to use the secret illuminati inspirational blog inspired action key to success law of attraction law of manifestation laws of success laws of the universe living in the now living in the present LOA manifestation mental-health mental power michigan mind power motivational blog obstacles overcoming depression overcoming obstacles pain politics positive thinking power quotes rhonda byrne secret to success source energy subconscious mind subconscious mind power success the key to happiness the key to success the secret the true key to success and happiness think about it: a write and reflect book 1 and 2 thought power true key to success and happiness truth universal laws of manifestation videogames wordpress wordpress blog